This month's Cook the Book Club went vegan when we teamed up with the Vegetarian Society of El Paso. The Vegan Slow Cooker by Kathy Hester is filled with mouthwatering pictures for almost every recipe, and most of the recipes are easy. The book has everything, from stock to pasta to pizza, and even desserts. Everyone had their reservations about cooking a meal in a crock pot, since most use theirs for making beans or chile con queso. Everyone was afraid that their recipe would burn, not cook through, or stick to the pot. None of that happened and the results were delicious! Here's how it went:

Lisa chose to make the Pumpkin & White Bean Lasagna (p. 104). She conducted a test run of the recipe during the week and found the lasagna a bit bland, and thought it desperately needed a topping, whether it be cheese or a bechamel sauce. On the day of the club, she tweaked the recipe by replacing the Italian seasoning with 1 teaspoon of dried sage and added a bit more salt. She also made a vegan alfredo made of cashew cream to top the lasagna with at the very end of the cooking time. You can find the recipe for her sauce here.

Jenn and her daughter Zoey made the Split Pea & Lentil Soup (p. 55). Jenn had to cook the lentils longer and still didn't think they were cooked enough (Lisa thought they were cooked through perfectly). She said that she would probably precook her lentils next time. In place of the chickeny bouillon (recipe included in the book), she used No Chicken broth, which can be found at Sprouts. She also thought that the soup was a bit bland, so she added more spices.

Lizzie made the Texas Style Tofu Tacos (p. 150). She thought it was really easy, and was surprised that all of the liquid had evaporated without the tofu didn't sticking to the pot (she made sure to keep checking it and stirring it).

Phyllis made the Smoky Bean Dip (p. 180). This recipe introduced Phyllis to two ingredients she had never cooked with before. She was surprised that this recipe asked for liquid smoke. Phyllis tried Daiya brand's Pepper Jack Shreds (vegan cheese), and found that it took awhile for the shreds to melt.

Luciano and his sister made the Chile-Chocolate Black Bean Brownies (p. 205). If you'll recall from last month's recap, Luciano is only 11 years old and already a proficient chef at home. Luciano was also going to make the Turkish Delight Tapioca (p. 210), but he wasn't able to find rose water. Lisa said that you can find rose water at Jerusalem International Foods Grocery Store, but she wasn't sure of the cost. Luciano omitted the chile so that his sister could enjoy them, too. He said that next time he would not add as much chocolate so that you could taste the banana more.

More discussion took place about vegetarianism and cooking tips. The group agreed that the media has sensationalized the need for protein and how a vegetarian diet lacks enough protein and essential vitamins. Vegetarians and vegans actually don't really worry about getting enough protein or vitamins, since they eat a variety of foods that include beans, grains, and vegetables. Jenn shared a great tip for preventing freezer burn: she places a piece of wax paper over the food in the container before freezing it.

Make the recipes pictured below and more, from Kathy Hester's The Vegan Slow Cooker. Click here to request the book @ your library. 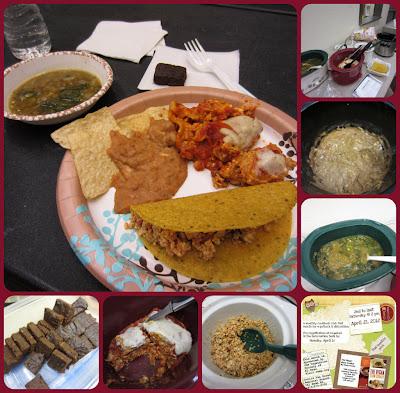 We hope you'll join us next month on Saturday, May 19 @ 2 pm when we cook from Martha Stewart's Everyday Food: Fresh Flavor Fast.
Please note that the potluck may not necessarily be vegan/vegetarian, but Lisa will always bring a vegetarian dish.
Posted by Dorris Van Doren at 2:57 PM