Today marks the fiftieth anniversary of John F. Kennedy's assassination, and thousands of published books later, there are still many theories with no consensus. This year alone saw 150 books published on Kennedy.

The following is a list of books that the El Paso Public Library owns that were published within 2012 and 2013. The list is a combination of new adult and children's non-fiction and fiction novels. Visit this link to request the books or visit your nearest branch to request and check out other books and movies about JFK.

Where Were You? America Remembers JFK
This book accompanies the NBC documentary that will air today at 7 pm our time. 46 people were asked to remember the day that John F. Kennedy was assassinated and speculate on what might have been since then. Interviewees consist of former heads of state, politicians, authors, journalists, performers, musicians, and more. You can also visit NBC's commemorative and interactive site: http://nvcdn.nbcnews.com/_util/jfk50/

End of Days: The Assassination of John F. Kennedy
A minute-by-minute account of the day President John F. Kennedy was shot, told by James Swanson, author of the New York Times bestseller Manhunt, which brought the Lincoln assassination to life. In End of Days, he reveals Lee Harvey Oswald's bizarre history of violence and follows John and Jacqueline Kennedy's wildly successful swing through Texas and their fateful Dallas motorcade ride. Swanson combines extensive research with his storytelling abilities.

The President Has Been Shot!
James Swanson was busy this year. Right before End of Days was published, this book was released for youth, grades 7 and up. The book includes archival photographs, explicit diagrams of the assassination scene, source notes, and a bibliography that includes conspiracy-focused literature.

Hit List
Authors, Richard Belzer and David Wayne set out to uncover the truth about the many witness deaths tied to the JFK assassination. For decades, government pundits have dismissed these "coincidental" deaths. Some of the deaths seemed purely coincidental; heart attacks, hunting accidents. Others clearly seemed noteworthy; witnesses who did seem to know something and did seem to die mysteriously. The findings were absolutely staggering: some cases were clearly linked to a "clean-up operation" after the murder of President Kennedy, while others were the result of 'other forces'.

The Third Bullet
Bestselling author Stephen Hunter, continues his fictional thriller series starring Bob Lee Swagger, a legendary Marine sniper hero. In this title, Swagger probes the lingering mystery of John F. Kennedy's assassination and exposes the mastermind behind the third bullet. Why did the third bullet explode? The Warren Commission had no idea, but Bob Lee Swagger knows.

Are you unfamiliar with this series, but think the name sounds familiar? Maybe it's because you saw the 2007 film, Shooter starring Mark Wahlberg!

Parkland
This book was originally published in 2007 under the name of Four Days in November. The book was re-released this year with a new title and cover to match the new motion picture starring Zac Efron, Marcia Gay harden, and other stars. In the book, Vincent Bugliosi analyzes JFK's assassination and its surrounding conspiracy theories drawing on forensic evidence, key witness testimonies, and other sources to explain what really happened and why conspiracy theories have become so popularized.

You can request both book and DVD at any El Paso Public Library branch.

Top Down
Famed journalist and news anchor, Jim Lehrer was actually a reporter in Dallas on November 22, 1963. He draws from his own experience to create a fictional account of a Secret Service agent who made the fateful decision to remove the security bubble from John F. Kennedy's parade car. The character struggles with suicidal feelings of guilt until a young reporter endeavors to determine the day's outcome if the bubbletop had been in place.

Who Really Killed Kennedy?
In decades of meticulous research, investigative journalist Jerome Corsi has sorted through mountains of evidence. Dissecting the Warren Commission's conclusion, he carefully separates the unlikely from the real, and speculation from facts. Having personally known or met many of the key players in the assassination drama, including a former top Soviet bloc intelligence official, Corsi reveals shocking information for the first time.

The Kennedy Half-Century
Celebrated political scientist and analyst, Larry J. Sabato explores the fascinating and powerful influence JFK has had over five decades on the media, the general public, and especially on each of his 9 presidential successors. Sabato reexamines JFK's assassination using heretofore unseen information to which he has had unique access, then documents the extraordinary effect the assassination has had on Americans of every modern generation. 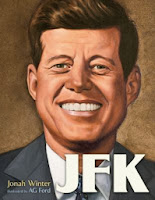 JFK
This illustrated tribute was written for the kinder through third grade set. The author introduces children to JFK's early life and career, and offers insight into his cultural significance to everyday Americans.

They Killed Our President
The former governor of Minnesota teams up with a successful author and some of the most respected and influential assassination researchers to provide all the conspiracy angles of this notable event in American history.

Killing Kennedy
The host of The O'Reilly Factor recounts the murder of JFK and how gunshots on a Dallas afternoon not only killed a beloved president but also sent the nation into the cataclysmic division of the Vietnam War and its culture-changing aftermath.

A couple of weeks ago, National Geographic aired a movie adaptation of the book starring Rob Lowe. The movie will re-air tonight at 7 pm. Visit the movie's site here. Be sure to also visit their interactive documentary: http://kennedyandoswald.com/#!/premiere-screen
The online documentary follows both Kennedy and Oswald side-by-side, combining soundbites, archival photos, video, and other primary sources. 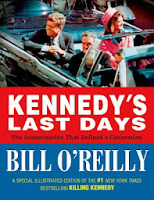 Kennedy's Last Days
This is O'Reilly's adaptation of Killing Kennedy written for grades 5 and up. The book also includes O'Reilly's memories of the day his high school class learned of the events of November 22, 1963.

Posted by Dorris Van Doren at 9:23 AM