We held our first ever cookbook club potluck this past Saturday, and it was a deliciously fun time! The club began with everyone serving themselves a little bit of everything. After a few bites, each of us introduced ourselves and talked about the recipe that we chose to make. Here's how it went:

Lisa started the introductions since she is the librarian at Dorris Van Doren who coordinated the club. She made shortbread with lime zest, and was surprised to find that these cookies took 45 minutes to bake (she took them out of the oven 15 minutes early when they started to brown). She thought that the recipe was a little vague when the exact size of the baking pan wasn't mentioned. She decided to use a 13x9 glass Pyrex pan. Lisa liked the simplicity of the ingredients and ease of the recipe.

Luciano introduced himself next. He was the most ambitious of the bunch, taking on the Dr. Pepper Ribs. He was also the youngest. Luciano has been cooking since he was 3 years old, and this is his third time making ribs at the ripe old age of 11. Seriously though, his parents (which he brought with him) bought all of the ingredients and he cooked the ribs on his own. Luciano said the recipe took a long time to make when you combine the marinating and cooking times. He said there were a lot of spices in the recipe, two of which he didn't have on hand- mustard powder and allspice. Everyone loved the ribs!

Erika, who also works at the library made the cactus salad. She took the smart shortcut by using jarred nopales (cactus). For some participants, this was their first time trying nopales, and found that they actually liked them.

Dawn recently moved to El Paso from Ohio. She made the poblano mac & cheese, and said that it was an easy recipe that she would make again. The most time consuming part was roasting the poblanos and waiting for them to cool down. She also forgot to grease the pan, but this didn't make any difference. The recipe also recommended additional add-ins, such as chorizo, chicken, squash, or corn.

Lizzie is an intern at our library, and she made the Texas caviar. This was her first time completely following a recipe. She likes to cook without recipes or make changes to them. She also thought it was an easy recipe that she would make again. Prepping and chopping the ingredients were the only time consuming parts. She thought this might make a good base for a soup.

More discussion took place about food and cooking tips. Everyone agreed they loved pasta, and would like to see a pasta cookbook selected for an upcoming potluck. All left contently full and excited for the next Cook the Book Club potluck.

Make the recipes pictured below and more, from Lisa Fain's The Homesick Texan Cookbook. Click here to request the book @ your library. 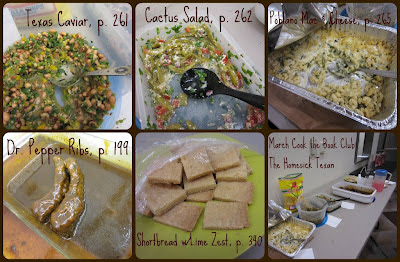 We hope you'll join us in April for our next Cook the Book Club potluck and discussion. Save the date for Saturday, April 21! Details at the information desk.
Posted by Dorris Van Doren at 12:27 PM

This was so much fun! It was interesting to learn about everyone and their dishes. For me, this club is a fun, low pressure way to learn to cook new receipes. Looking forward to the next club meeting : )

Glad you enjoyed it! Thanks for participating & bringing that yummy Texas caviar!