This is a new weekly blog post featuring what the Dorris Van Doren staff members are reading, watching, playing, making, or listening to. Share your finds with us here in the comments or on twitter (@elpasolibrary) and we'll retweet you! 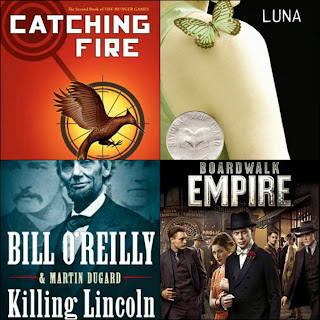 Sara: Catching Fire by Suzanne Collins
It has been a while since I've read a young adult book and I am really enjoying it. My goal is to read it before I watch the movie. I became interested after recently watching the Hunger Games movie. Although the book has its slow parts I definitely recommend it to both teens and adults.

Lisa: Luna by Julie Anne Peters
I finally got around to reading this classic young adult novel about Liam who identifies as a girl. His story is told through his sister, Regan. I enjoyed the book and thought the subject matter was handled well, but it moved a little slow at times and then wrapped up too neatly in the end. This book brought to mind another book I read years ago. Parrotfish by Ellen Wittlinger is about Angela who identifies as a boy. While Parrotfish is informative, it seemed to only scratch the surface of what it's like to be a transgender teen. I did like it and thought it was sweet.

Lluvia: Killing Lincoln: The Shocking Assassination that Changed America Forever by Bill O’Reilly and Martin Dugard
Painstakingly detailed and unambiguous, this book, gives an account of Lincoln’s last days in office before his assassination and the eventual capture of the assassins. The narrative is as informative as it is gripping. The in-depth research that was done for this book is evident and almost unbelievable due to its attention to small details like the clothing worn by the subjects. It is not a typical historical book in that it just dictates dates and locations; this book plays out more like a thriller which makes it much more enjoyable.

Angie: Beast Behaving Badly (Pride Stories Series) by Shelly Laurenston
I really like this series, it makes me laugh. Its romantic, quirky and funny. Bo is part polar bear, part lion, and pure alpha male. He's determined to protect Blayne from stalkers who want to use her in shifter dogfights. The only book from the series that's in our system is The Beast in Him.

Sara: I just binge-watched the third season of Boardwalk Empire, an HBO series about bootleggers during the Prohibition era. The library has the first three seasons. The series is considered historical fiction and includes a bit on how Al Capone got his start, and of course many other gangsters I had never heard of. The drama, the costumes, and the characters are great. I recently found out it's based on a book by Nelson Johnson titled Boardwalk Empire: The birth, high times, and corruption of Atlantic City. The series is a bit violent so I am sure it is not everyone’s cup of tea, but if you liked the Sopranos you might enjoy this one.
The Conjuring: I gave it an A+ for scary moments and because it’s based on a true story.
Disconnect starring Jason Bateman gets a D- since it was quite predictable.

Lisa: Portlandia: I randomly watched a couple of episodes from season 2 the other night. I laughed a little too obnoxiously. I love this series because Carrie Brownstein and Fred Armisen nail stereotypes I can totally identify with. Unfortunately, we don't have this IFC series at the El Paso Public Library...yet?